A Man. A Woman. Just Friends?

Dfg Admin
April 2012 edited April 2012 in Life
CAN men and women be friends? We have been asking ourselves that question for a long time, and the answer is usually no. The movie “When Harry Met Sally...” provides the locus classicus. The problem, Harry famously explains, is that “the sex part always gets in the way.” Heterosexual people of the opposite sex may claim to be just friends, the message goes, but count on it — wink, wink, nudge, nudge — something more’s going on. Popular culture enforces the notion relentlessly. In movie after movie, show after show, the narrative arc is the same. What starts as friendship (Ross and Rachel, Monica and Chandler) ends up in bed. Enlarge This Image 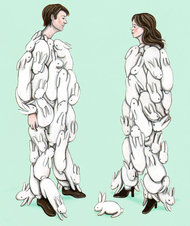 
There’s a history here, and it’s a surprisingly political one. Friendship between the sexes was more or less unknown in traditional society. Men and women occupied different spheres, and women were regarded as inferior in any case. A few epistolary friendships between monastics, a few relationships in literary and court circles, but beyond that, cross-sex friendship was as unthinkable in Western society as it still is in many cultures.
Then came feminism — specifically, Mary Wollstonecraft, the mother of feminism, in the late 18th century. Wollstonecraft was actually wary of platonic relationships, which could lead too easily, she thought, to mischief. (She had a child out of wedlock herself.) But she did believe that friendship, “the most sublime of all affections,” should be the mainspring of marriage.


In the 1890s, when feminism emerged from the drawing rooms and genteel committees to become a mass, radical movement (the term “feminism” itself was coined in 1895), friendship reappeared as a political demand. This was the time of the “New Woman,” portrayed in fiction and endlessly debated in the press.


The New Woman was intelligent, well read, strong-willed, idealistic, unconventional and outspoken. For her, relationships with men, whether or not they involved sex, had to involve mental companionship, freedom of choice, equality and mutual respect. They had, in short, to be friendships. Just as suffrage represented feminism’s vision of the political future, friendship represented its vision of the personal future, the central term of a renegotiated sexual contract.

Easier said than done, of course. But the notion of friendship as the root of romantic relationships started to seep into the culture. The terms “boyfriend” and “girlfriend” also began to appear in the 1890s.
We take the words for granted now, but think of what they imply, and what a new idea it was: that romantic partners share more than erotic passion, that companionship and equality are part of the relationship. A boyfriend is a friend, as well as a lover. As for husband and wife, Wollstonecraft’s ideal has long since become a cliché. Who doesn’t think of their spouse — or claim to think of them, or want to think of them — as their best friend?
So friendship now is part of what we mean by love. Still, that doesn’t get us to platonic relationships. For that we needed yet another wave of feminism, the one that started in the 1960s. Friendship wasn’t part of the demand this time, but the things that were demanded — equal rights and opportunities in every sphere — created the conditions for it. Only once the sexes mixed on equal and familiar terms at school, at work and in the social spaces in between — only once it was normal and even boring to see a member of the opposite sex at the next desk — could platonic friendships become an ordinary part of life.
And that’s exactly what has happened.


Friendships with members of the opposite sex have been an important part of my life since I went to high school in the late 1970s, and I hardly think I’m alone. Consult your own experience, but as I look around, I don’t see that platonic friendships are actually rare at all or worthy of a lot of winks and nudges. Which is why you don’t much hear the term anymore. Platonic friendships now are simply friendships. But doesn’t the sex thing get in the way? At times, no doubt. It’s harder for the young, of course — all those hormones, and so many of your peers are unattached. In fact, one of the most common solutions to Harry’s quandary is to have sex and then remain friends. If the sex thing gets in the way, the answer often seems to be to just get it out of the way.


But it doesn’t always get in the way. Maybe you’re not attracted to each other. Maybe you know it would never work out, so it’s not worth screwing up your friendship. Maybe that’s just not what it’s about.
So if it’s common now for men and women to be friends, why do we so rarely see it in popular culture? Partly, it’s a narrative problem. Friendship isn’t courtship. It doesn’t have a beginning, a middle and an end. Stories about friendships of any kind are relatively rare, especially given what a huge place the relationships have in our lives. And of course, they’re not sexy. Put a man and a woman together in a movie or a novel, and we expect the sparks to fly. Yet it isn’t just a narrative problem, or a Hollywood problem.


Close friendships between members of the same sex, after all, are also suspect. Even Oprah has had to defend her relationship with Gayle King, and as for men and men, forget about it.
I cannot think of another area of our lives in which there is so great a gap between what we do and what our culture says we do. But maybe things are beginning to change. Younger people, having grown up with the gay-rights movement and in many cases gone to colleges with co-ed dormitories, are open to a wider range of emotional possibility.


Friendship between the sexes may no longer be a political issue, but it is an issue of liberation: the freedom to love whom you want, in the way that you want. Maybe it’s time that we all took it out of the closet.

William Deresiewicz is an essayist, critic and the author of “A Jane Austen Education.”