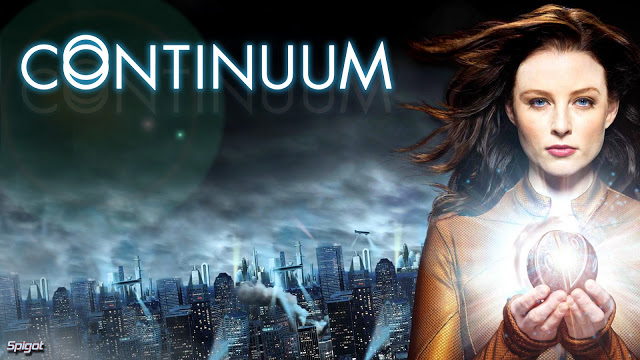 I thought to myself I’d watch a couple of episodes to get a feel for the series and if I didn’t find an interest I could bond to I would simply move on to the next, but I found out series don’t really work like that because a series intention is to keep you guessing after each episode giving you the need of closure to achieve a final outcome. Yes, yes ….. I succumbed and watched more.

Continuum is a Canadian Sci-Fi action drama with those stereotypical traits expected from a TV series that doesn’t seem to really possess the financial expenditure of a mega block buster movie, but has enough equity to retain some form of interest. It’s basically a SyFy channel series that definitely has a distinctive SyFy feel about it, but after watching some shitty assed movies specifically created for the SyFy channel I would have to say it goes a little beyond that type of quality, but only a little. Personally it lacks the luster of anything high budget out there.

The story is based on a Kiera Cameron (Rachel Nichols) a CPS protector (or a glorified popo) from the year 2077 who gets accidently sucked and stuck back in the year 2012 with a group of terrorists who were due for execution but manage to thwart that idea with a time jump escape. She leaves behind her son and husband which are her catalyst of hope for returning back to her time period.

In 2012 she instinctively morphs into her role as a protector and pursues these terrorist like they were a piece of Coby scotch fillet and she a famished pit-bull. The ulterior motive of these terrorists is to reshape the future by changing the past. She eventually teams up with a younger version of a future renowned genius, a Vancouver detective from the present day and an assortment of others related to her quest in the hope of deterring the plots of so called evil.

Although I mention “terrorist” a bit throughout this post, I as a free thinker tend to view this as more a propaganda based conundrum targeted against, not terrorism, but activism. It portrays the bad guys as militant sociopath anarchists who would stop at nothing to achieve the next level by means of mass murder and deceit. Yet it seems to paint corporate and government ideas and ideals as the solution to a problem. It literally consists of political and corporate knob polishing and circle jerking around the dark nights of the business round table. Conform to our choice of society for a minimal fee of freedom or prepare to be branded the worst of labels, “terrorist”.

I did watch each episode with a curious interest. I felt the reasons I watched it wasn’t so much for the sake of excitement, action or even closure but more whether the story politically corrects itself from the tyranny of corporate or political means in favour of the activist, but I’ve yet to see that.

There are moments when you discover flaws in their concepts of problem solving that you irritably mumble the solution under your breath while watching, only to be frustrated even further when they don’t follow your simplistic guidance (Yes I do that shit quite often).

Be prepared because Continuum is so shrouded with corporate and political overtones it makes it almost unbelievable, it has more holes in it than a fishing net and is literally saturated in weak sauce (80% water weak) but it did hold my interest, so I can’t fuck it in the ass completely. (Although I willingly would to Rachel Nichols)