Daktologist Global Moderator
August 2012 edited August 2012 in Life
The Joule Thief is a very simple circuit mainly used to run white and blue LEDs off of low voltage supplies, generally around 1.5 volts or so. These voltages are fine for red, yellow and some green LEDs but as white and blue LEDs need around 3-3.5 volts to light, 1.5 volts just ain't going to cut it. The joule thief is a very simple switch mode power supply capable of converting voltage and costs around $1.50 to build. As you can see below it consists of an inductor which can be hand made with around 30 turns of insulated wire around a ferrite toroid, one 1000 ohm resistor, a 2N3904 transistor (I used a 2N3053) although most NPN type transistors will work, and a white or blue LED. 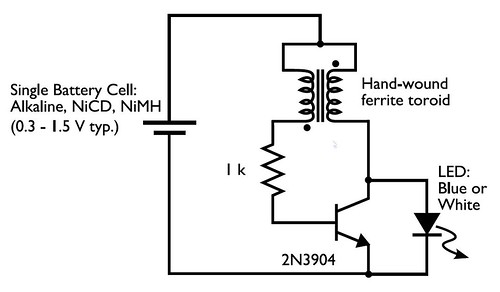 Start by winding your transformer. First add 15 turns to the toroid ensuring they are wound tightly and close together, next add another 15 to the opposite side of the toroid then join the leads on on side of the toroid together so you are left with one lead per coil and the other two joined together, the join is the positive terminal of your circuit. next solder the 1000 ohm resistor to one of the un joined leads and solder the other end to the base lead of the transistor (the one labelled

. Connect the last un joined lead to the collector lead of the transistor (the C lead). now connect the LED across the collector and emitter leads. short lead to emitter, long lead to collector. Connect your negative battery terminal to the emitter lead of your transistor and the positive lead to the joined leads on the coil. If you have connected everything correctly, the LED should illuminate and you may hear a faint high pitch whine coming from the coils.

This circuit is good for powering a couple LEDs, I modified a 6 LED flash light to work on a single AA battery and found it wasn't as bright. Still its a useful circuit for some things.
Share on Twitter