TheGreenDoctor Regular
July 2010 edited September 2018 in Man Cave
This is a long term work in progress, and this first post has had several edits over its 8+ years existence on a 12 year (and counting) long restoration project as I have had time / seen fit to add notes to. There may be duplication of information through the thread when updates are added as I keep personal text files to track specs that change over time, and all information is pulled from these records.

Sorry this is a bit messy and not formatted too well, I'm not too good at it.

For the past six twelve years, I've been restoring a 1978 Ford Mustang II 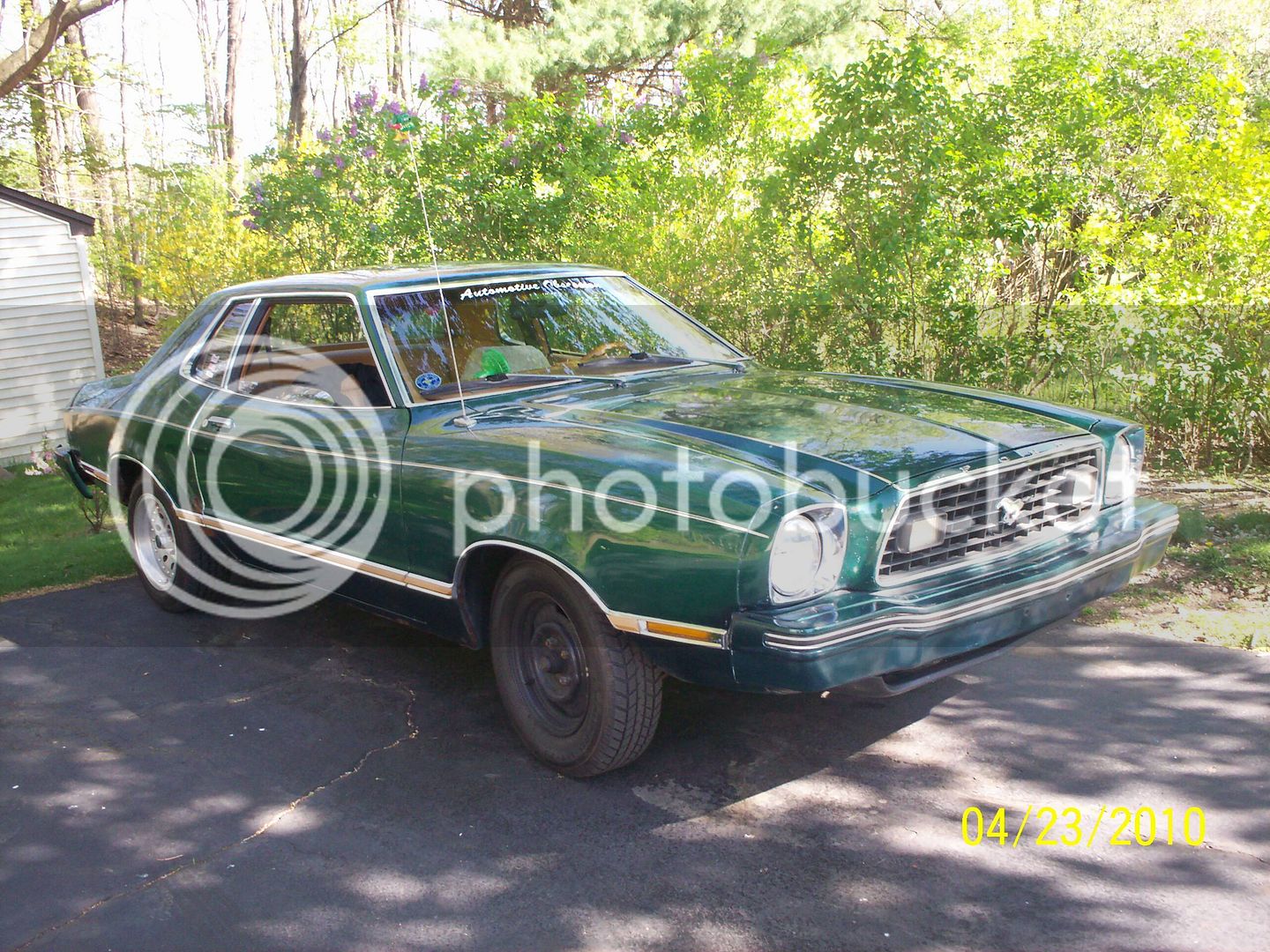 a more current photo seen here, The front valance has had the silver paint stripped and has been painted black recently

Engine:
So far, the engine has been rebuilt, It is a Ford 2.3 Bored at least .20 over, and as far as .60 over (can't get a straight answer from the machine shop, or the installer, and there are complicated circumstances surrounding the motor) I've installed a Holley 4160 Carburetor with 14" offset Summit Racing air cleaner and reusable filter, Offenhauser 4bbl intake, upgraded to a ranger roller cam, MSD ignition coil, added a Hedman Hedder, done the exhaust (2 1/4", with Flowtech Warlock muffler) (though after three New England winters it needs to be done again)
Update Jan 2014: Muffler pictured below was installed May 2010 and the exhaust was replaced in aug 2011, while retaining the same muffler]

Update Sept 2018 The previous engine started dumping coolant into the pan back in late 2015 so through the first half of 2016 I restored and painted the engine bay and I built a new engine (well, short block) and put the worked over head from the old engine on it as it only had around 4000 miles or so on it. I also replaced the clutch, pressure plate, and throwout bearing at the same time as well as the transmission mount. I also added a Powermaster 150 amp alternator as well as the wiring harness upgrades required for safe operation.
The most current specs as of this year are: 74 Ford 2.3 block bored .030 over, 2.3 Stroker crank (2350CC I think), Holley 4160 390CFM carb with secondary metering block conversion(4150 style), Offenhauser dual port 4bbl intake, Boport stage 1.5 cam (no exact duration specs available but it is .436 lift, rpm range 3000 to 6500+) iron head with "big" 1.89" intake and 1.59" exhaust valves with double springs and a little smoothing done in the runners as well as unshrouding the valves. Esslinger adjustable cam gear and lightened aux shaft gear. Exhaust ports are bored out from the bottom up to 1 5/16" . The header is from Speedway motors and has 1 5/8" to 1 3/4" stepped primaries into a 3" collector that is reduced down to 2 1/2" all the way to a Flowtech Warlock race muffler.
After a week long carb tuning session following the metering block conversion, (works out to around 4.5 hours between road testing and tuning time, plus about 3 hours for the metering block conversion because I cleaned everything while the carb was apart) this engine dynoed at 181 HP to the wheels at the 6000 RPM (Redline I have set as this is a street engine with stock rods, pistons and hardware), and 169 Ft-lbs of tq at 3500 RPM back towards the end of June 2018. Details of the build along with photos are in the thread.

It also has a few Esslinger goodies: Adjustable cam gear, Heavy duty timing belt tensioner, billet steel intermediate shaft, and bronze distributor gear. It has a newer radiator and master cylinder, along with most of the brake lines replaced.
I have one of the chrome Ford Racing valve covers on it. 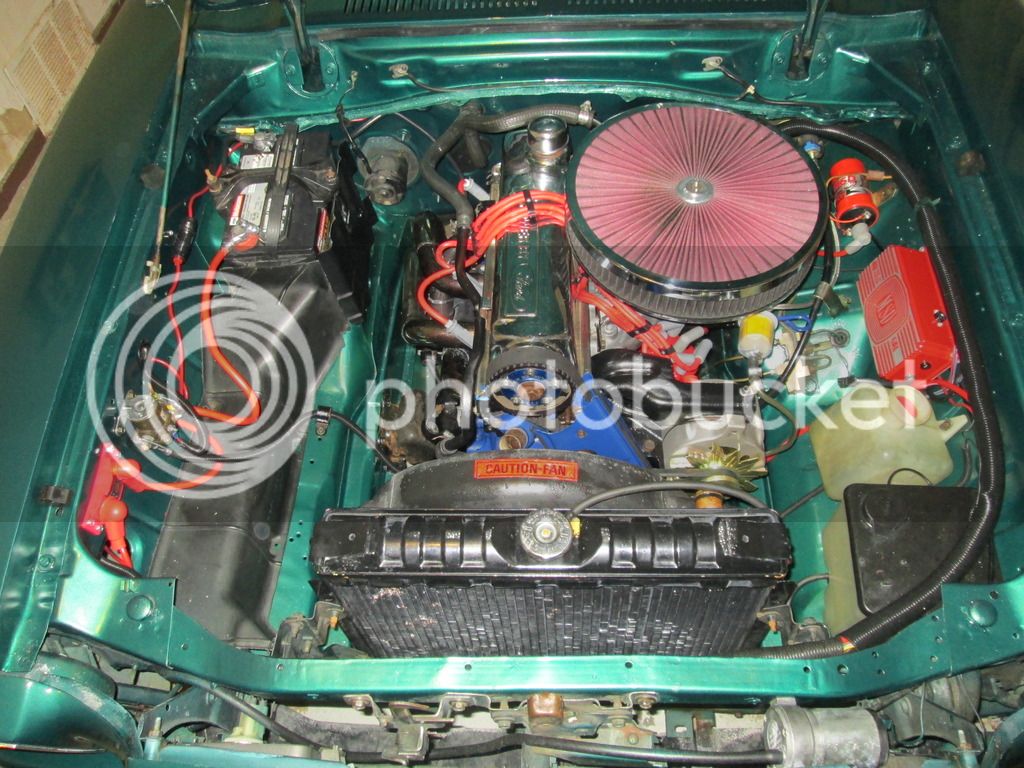 I have a ported head with big valves to go on as a side project as the price I got was too good to pass up. All it needs is a cam

I've got a new Warlock ready to go on freshly painted with high heat copper paint to try to keep it from rusting as fast.
Update Sept 2018 Muffler installed years ago, see thread. 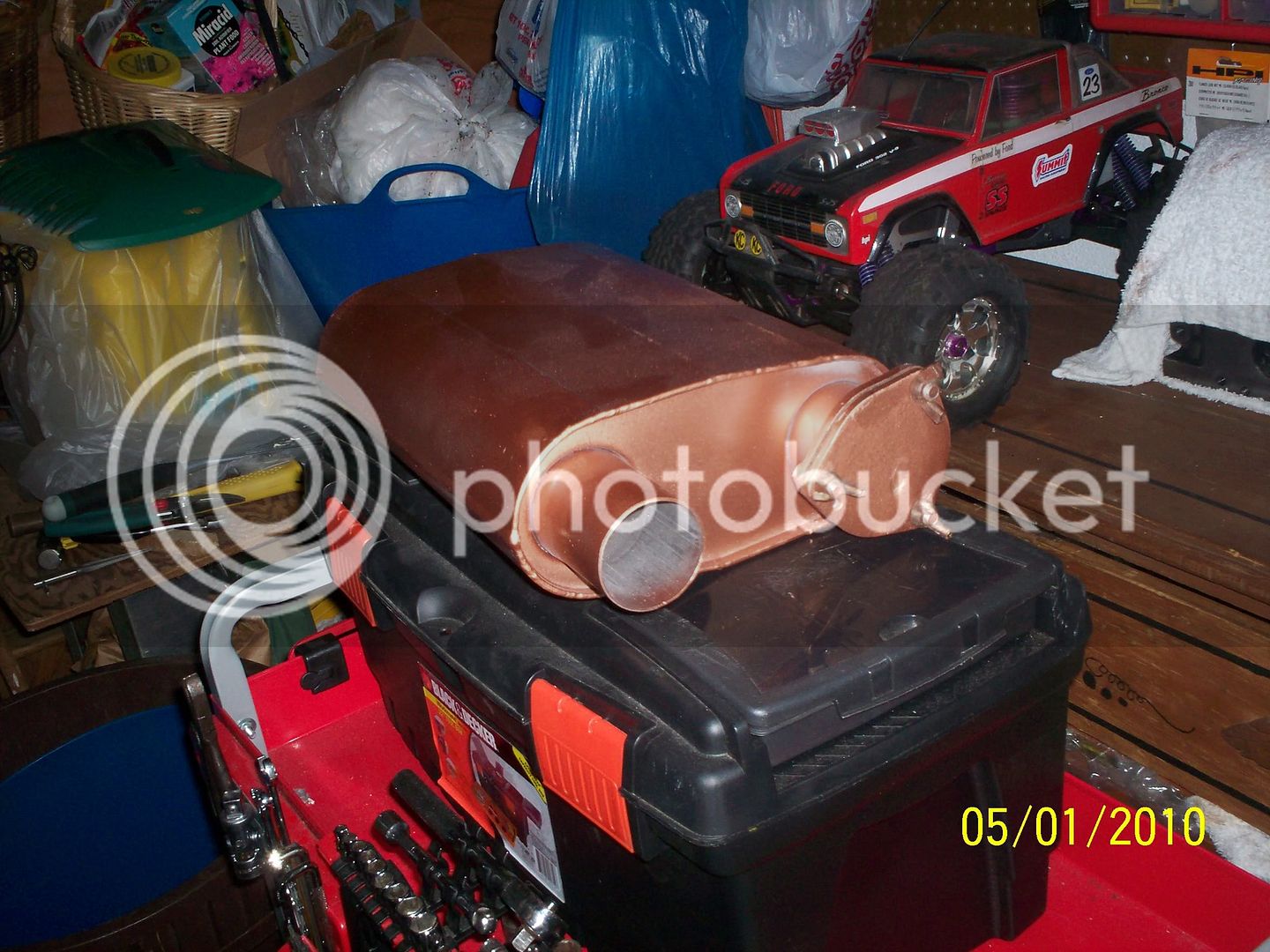 Interior:
I'm keeping the interior pretty much stock except for a decent sound system and a set of Summit oil pressure and water temp gauges. I plan on changing the head unit at some point to a stock appearing in dash unit as the current system has a dead CD player and no MP3 connectivity, along with me wanting to mount the mint vintage emergency scanner I picked up at a yard sale in its place.

[Update Jan 2012: I installed a Cobra CB radio in July 2011. I am still running the bad head unit. The emergency scanner currently resides in the glovebox]
Update Sept 2018 I installed a RetroSound head unit some time in 2014-2015

and an 8" sub back in late 2016 but it never came up in this thread. I hope to cover this at some point but the sound system is still in progress state. The emergency scanner has been relocated from inside the glove box next to the CB radio.

Body:
The body is in pretty poor shape, with large holes in the quarter panels, and lots of rust poking through in various areas, including a couple spots in the floorboards around the outer drivers and passenger side seat mount holes, and one on the passenger side up near the firewall. I have a new floorboard panel for the drivers side, but haven't ordered one for the passenger side yet.

Update Sept 2018 Bodywork was completed in 2012. As this is a 3 season daily driver in a northern state, there is some new rust repair that will need to be readdressed at some point.
I was also lucky enough to get my hands on an NOS quarter panel for the passenger side, but have had no luck on the drivers side.
A few detailed (but dated) pics here. The body is much worse now.
http://s86.photobucket.com/albums/k113/Mark_Taylor87/Car%20Pictures/Tech/Body/
The rear bumper was trashed from an accident, but I was able to get another bumper from a friend of mine so I painted it and installed it
Update Sept 2018 I am i the process of installing a fiberglass tucked bumper. I have no current estimate on when I will install. 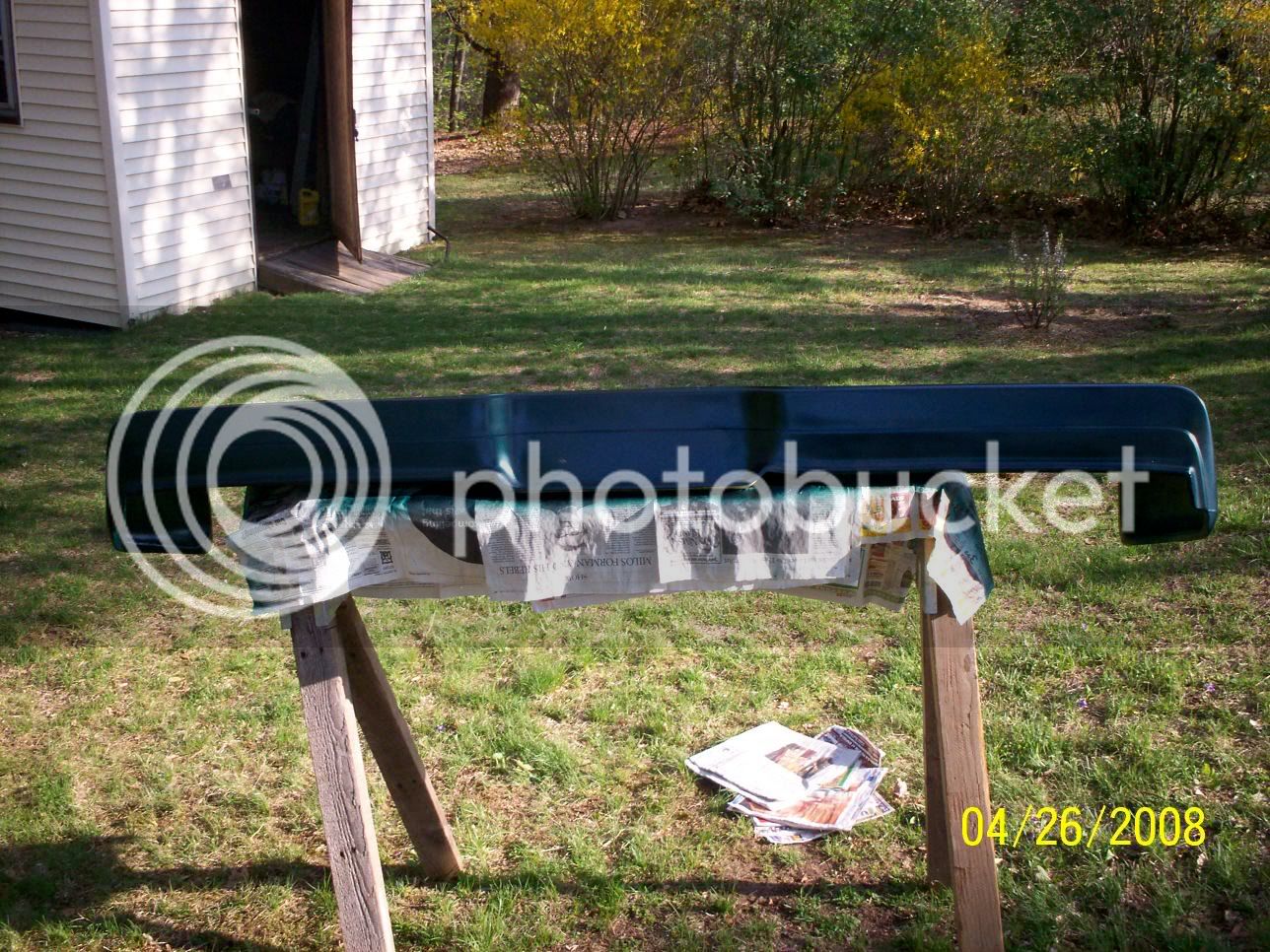 [Update Jan 2012: I have floorpans For the drivers side and passenger side. The drivers side was done in mid 2011 sometime, but the passenger side still needs to be done.]
Chassis and Suspension:
The rear suspension has been replaced. New shocks, leaf springs and shackles, However the rear bumper mounts are rotting away and I haven't been able to track down a set yet.
Update Sept 2018 I have good used mounts installed and cut down for the fiberglass tucked bumper/roll pan.

The front end is in poor shape, but I've ordered new upper and lower arms, tie rod ends, bushings, springs and spring cushions, and sway bar end links from Speedway Motors. I got part of the shipment, but some of the parts were out of stock, so I'm still currently waiting on them

[Update Jan 2012: The front suspension has been installed after the catastrophic failure of a suspension arm (details below) in Aug 2011.]
Wheels and Tires
I Have American racing Outlaw II Wheels in the back with Cooper Cobra GT tires in 195/60R14. The fronts are still my snow tires and they are 185/70R14s and are really ugly. I have another pair of the Outlaw II wheels I plan on wrapping in 235/60R14s and putting on the rear while swapping the 195s to the front.
[Update Jan 2012: The car currently has Cooper Cobras in 235/60R14 in the rear, and 195/60R14s in the front as shown below.
Update Sept 2018: The tires were at end of life earlier this year from wear and age as they were from 2009 and also balding. They have been replaced with brand new wheels and tires of identical brands and dimensions.

(previous most recent post 2018)
Yet again, Ive been gone for another year. New engine still holding strong. Back in June, I did a 4150 conversion to the carb and retuned it and redynoed it and got an absolutely ridiculous 181 HP( at 6000 RPM) and 169 Tq to the wheels out of it. I also grenaded the rear end in it, and the stock clutch slips pretty bad. I'm thinking about putting an SVO (turbo) clutch in it. Fixed it and was having a blast with it until about 3 weeks ago when the clutch fork popped off the ball and slid out and it acts almost like it has a hydraulic clutch now

. Since the transmission has to be pulled I figure now is the time to rebuild it as its been seeping more gear oil than last year and randomly popping out of 2nd a lot, and the syncros seem really worn because I need to rev match for 2nd and 3rd gear shifts. Ive had a trans rebuild kit on the shelf for several years so it seems like its time to finally use it. Or I could put a T-5 in it and get overdrive but thats expensive.
Share on Twitter
«123»