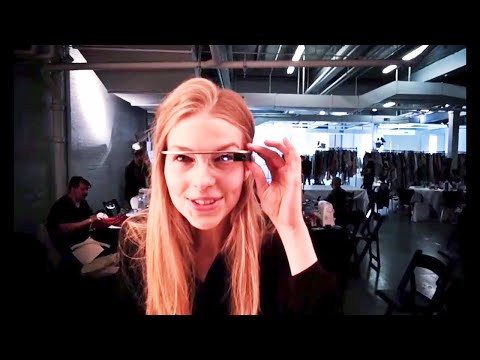 ¶For a preview of how we all may be making movies in a few years, take a look at “DVF Through Glass,” a short video made for, and partly shot by, the fashion designer Diane von Furstenberg. Other camera operators included employees of Ms. von Furstenberg’s label, DVF, and models who walked in her recent Fashion Week show. All were wearing Google’s futuristic “Glass” glasses, which come equipped with tiny cameras (as well as tiny computer monitors) and are poised to take us a big step closer to the cyborg age, once they become available to the public.


¶The video, above, is a bit dark at times, and bright light, on the runway or the sidewalk, appears to give the camera some problems. (You know right away that you’re watching a fashion video when a disembodied voice, possibly a model’s, says in lilting French: “What do you want? A smile?”) Otherwise it looks like any other fashion promo, or indie film. In this context, the camera isn’t used to capture any images we haven’t seen before, though it’s interesting to know that the runway shots were taken by the models themselves. The amateur footage was edited by Greenpoint Pictures. The Glass device records sound, but Ms. von Furstenberg’s narration and the music, which constitute much of the soundtrack, were professionally recorded.

¶One of the Google founders, Sergey Brin, appears in the front row, and later takes a bow with the designer. In an image we may see a lot once Glass becomes available, the final shot shows what happens when you drop a pair of the glasses.


The concept is quite amazing and I wonder if I can replicate this in some way.
Share on Twitter